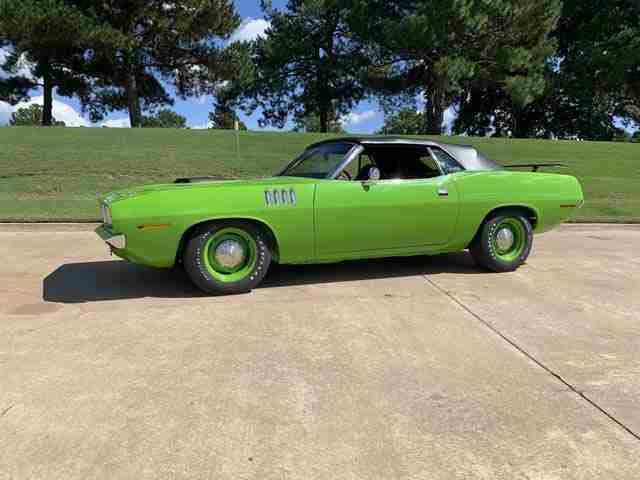 This is as close as you will get unless you have about $4-5 million to spend. This car has been under an extensive frame-off/rotisserie 2-year restoration that just finished in August of 2020. It has the Hemi K-Frame installed, Hemi-Radiator, Hemi Torque Boxes, Hemi Rolled Hemi Fenders, a Hemi Fender tag, and so much more. The Green capped battery is for shows. Both batteries go with the car. This is one of the finest examples of as close as you can come to the real thing without breaking the bank. World-renowned Mopar authenticator David Wise came by to put the correct factory markings on this car to make it look even closer to the thing. Mopar performance stock 426 Hemi and 18 Spline Hemi Transmission with a Dana super track pack rear end. Every component in this car is new or freshly restored within the last 200 miles. Over $200,000 has been put into this extravagant build. Here are some facts about a Hemi Cuda Convertible. In 1971, only 6,228 Cuda hardtops and 374 convertibles were built. Only 108 hardtops were built with Hemi engines, and just eleven convertibles had Street Hemi power. There were only two four-speed manual Hemi Cuda convertibles built, which makes them the rarest of them all. The 1971 Hemi Cuda Convertible is no considered one of the most valuable collectible muscle cars. Only 13 were built, and in June of 2014, at Mecum auction in Seattle, a blue four-speed sold for $3.5 million. Feel free to contact me for more information and pictures.