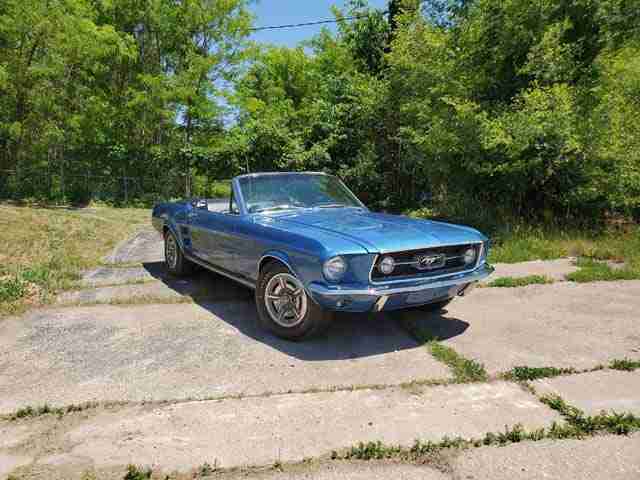 Up for sale is one of the cleanest and most accurately restored Mustangs of its era. The vehicle was acquired in 1995 in good original “driver” quality with 56,000 miles. The intention of the build / restoration was to put together a vehicle to WIN in the “Trailered Concourse” show circuit through the Mustang Club of America and similar series. The car received a true nut and bolt / rotisserie restoration with painstaking accuracy put into recreating the original Ford assembly line process details.

In the initial research stage of the project the car was found to be more of a rarity than originally thought as it was ordered with the Competition Suspension equipment group. This option (only offered in 1967) essentially gave customers access to the Shelby spec suspension and 15″ rims and performance tires without the necessity of ordering an actual Shelby. So, for those folks in ’67 wanting a convertible Shelby, this was essentially the closest thing you could get. As this was an incredibly short run and very little known option, there were not many vehicles ordered with it. In fact, only 21 convertibles were produced with it in total. In the research that I have done, I have only found 4 surviving cars.

This ’67 was ready for the show circuit in 2005 and has taken the highest level of award at every event it has entered since that time. On a cleanliness / restoration quality / accuracy point scale, this car has received as little as single point deduction for a near perfect show winning score. With many years research, including the accumulation of numerous binders of material and the attendance of as many car shows as my schedule will allow, I can say without a doubt that this is one of the best examples of a showroom original mustang that you could find. I did not build this car to resell or profit from, this was a personal project done for the sole purpose of being a top concourse show car.

With many other projects in the works, and the successful show circuit life of the car, I feel it is a good time to find a new home for the ol’ girl. As I am the owner and restorer, I can answer any questions you may have on the vehicle. Easiest way to reach me would be via my shops land line.