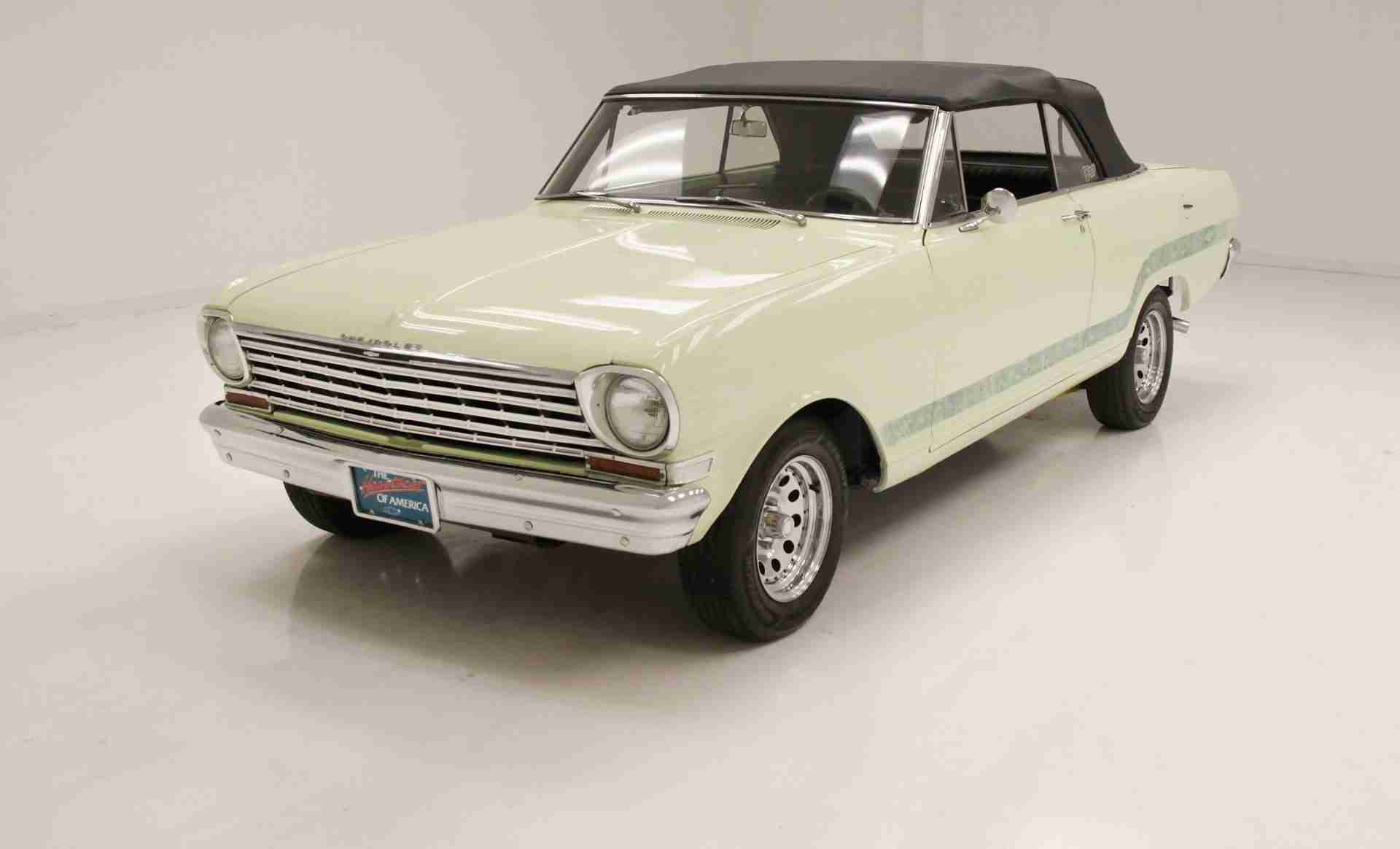 Chevrolet designer Clare MacKichan recalled about creating the Chevy II: “There was no time for experimentation or doodling around with new ideas from either the engineers or from us in design; And it had to be a basic-type car.” “I think that was the quickest program we ever did at any time,” he continued. “We worked night and day on that car, and it didn’t take very long to run it through our shop because we had a deadline.” And that’s what made the Chevy II one of the fastest new-car development programs in GM history – just 18 months after the designers got the green light, the first production Chevy II rolled off the Willow Run, Michigan, assembly line in August 1961, in time for its September 29 introduction.

For consignment a piece of early muscle car, before they knew of such a term muscle car. This one has had some cosmetics done as well as a drivetrain upgrade, a new top, some rust bubbling for the steel, as well as a re-upholstered front seat, new door panels and fresh carpeting, we have landed in 1963 and are ready to go for groceries or do some hot rodding in style.

Exterior
With a 22 year old respray applied the exterior now bathed in pale green, it has some shine but does present with some bubbling appearing on the lower panels of the body. All steel panels are good and have decently minded gaps. The trim spear on the sides has been removed and a sponge painted stripe has been added and shows in green, blue and red. Chrome and brite-work is in good condition with no rusting and only minor tarnish. Up front is a horizontal front shiny ribbed grille, leading to the chrome topped line in the hood center seam, C H E V R O L E T badge in front of the hood, and beautiful bumper below you’ve arrived with a shout! Window trimmings are shiny and brite as are the curved rear trimming on the rear deck. Around back, more Chevrolet badging this time with a bow tie below being framed by square canted taillights that split between tail and reverse lighting, and another shiny bumper is below. Chrome American Racing wheels in 14″ format are wrapped in like new blackwall rubber

Interior
A swing of the doors and we note the new door panels with horizontal chrome trim above and below and even some tuck and roll in the black vinyl. This is broken up in the middle by 2 brushed aluminum rectangles as well as chrome window cranks and door releases. A black vinyl armrest sits within a tray and is new as well. Inside a newly covered front bench in black vinyl sits on showroom condition black carpeting which is flooded cockpit. In back an original bench seat sprawls between the side panels and while nice, does not match the front seat pattern. The original dash shows well and has an oval instrument cluster and in the center of the black steel is an AM/FM/Cassette player. The dash front is formed with a mid horizontal running wide “spear” which has a lineup of pulls in chrome on the bottom of the dash below this spear. A three-spoke drilled Grant GT steering wheel wrapped is fronting this dash along with a column mounted aftermarket tachometer. Gracing the sea of black carpet is a B&M shifter in its own consolette.

Drivetrain
Well restored with clean black paneling as far as the eye can see and more visual excitement with the block and intake manifold bathed in a thick coating of bowtie orange/red. Chrome for the valve covers, air cleaner assembly and alternator add some excitement to all the surfaces in this preserved and near perfect bay. As to the particulars, the freshly rebuilt engine is in V8 format, a 1967 283ci unit to be exact and is fitted with a new crank, pistons and a 350/350 camshaft. It is topped with a 4-barrel Edelbrock 600cfm carburetor and has a 2-speed automatic on back which is a Powerglide transmission. 3.36 is the rear axle ratio. A muscle drivetrain for sure, however not original, but definitely the way Chevrolet should have built them way back in 1963

Undercarriage
A mixture of black undercoating, some road dirt, and patina with slight surface rust but it’s rare on this undercarriage. All supporting cast members are present and accounted for like the rebuilt front independent coil spring suspension, and rear leaf springs with traction bars. Drum brakes are on all 4 corners and a clean rust-free dual exhaust with Turbo mufflers is on.

Drive-Ability
A quick lighter, and smooth idler, I gave it a little goose, and off we go, cruising or running fast, this car does it all. Also, the new seats are truly comfortable, and all functions were working swimmingly.

This is the true definition of a muscle car that our consignor created out of a car designed years before the term existed. An older build still presenting nicely today, with recent maintenance, service and a rebuilt engine it’s hard to say no to this drop top Nova right out of 1963.