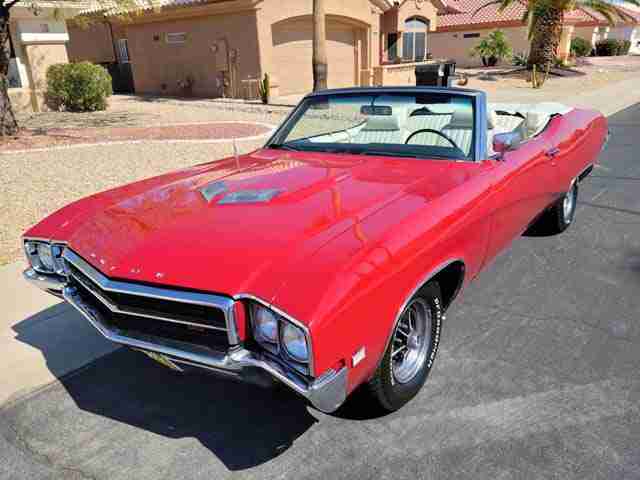 This rare car is 1 of only 131 Stage 1 automatic convertibles built for 1969. This is a numbers matching original drivetrain car. For 1969, Buick made its Stage 1 package  previously available via the parts counter only  a factory-installed option. Consisting of better-breathing cylinder heads, a high-lift camshaft, heavy-duty valve springs, hollow pushrods, a higher-capacity fuel pump, a revised oil pump, a larger-diameter exhaust, a modified Quadrajet carburetor and a new distributor, the Stage 1 package raised the 400-cu.in. V-8’s output from 340 horsepower to 350 hp, while the stated 440 lb-ft of torque remained unchanged. On paper, it hardly seemed worth the expense, but the real-world numbers told a different story, and those in the know put the output of the Stage 1 package at close to 390 hp. The original rusty frame was replaced along with quarter panels, floor and trunk pans. All gas and brake lines are new. The Buick GS Club was the source for new progressive springs, shocks and zero fit Doug’s Headers. The original manifolds and stock rear sway bar are included.