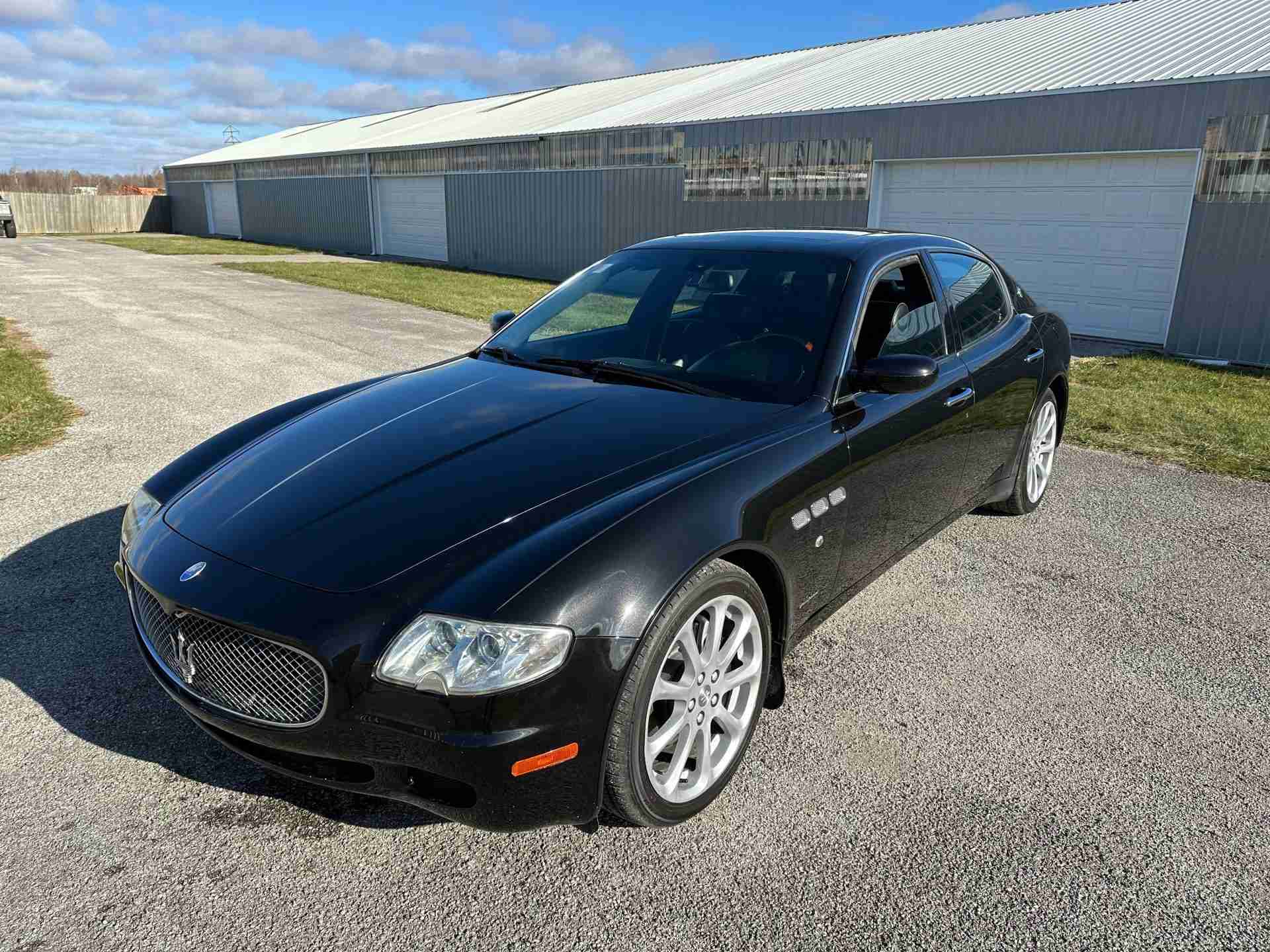 2007 Maserati Quattroporte. Available now is this exquisite Italian Maserati Quattroporte sedan dressed in a luxurious all black. This beauty is powered by the Ferrari F136 4.3L V8 engine mated to an automatic transmission. This Maserati has been very well maintained but as with any exotic car of this age, needs some attention. Mechanically the car runs very strong. It does have a warning light for the air bag and for the skyhook suspension system. It also has the radio locked out due to not having the security code. This would be a great project for someone looking to get into an Italian car with Ferrari power for a very low price.

The creation of the Quattroporte V would be a culmination of events that had begun in 1993 when the Italian auto giant, FIAT, bought the Modena carmaker from De Tomaso, another Italian car brand. This rival sports car manufacturer had saved Maserati from liquidation, in 1975, however their plans for the Modena car plant had been ill conceived and poorly executed throughout. With FIAT’s backing, Maserati were on a stronger footing and, in 1997, 50% of the company was “sold” to FIAT’s stablemate, Ferrari. Their business plans for the Trident were very different. While De Tomaso wanted to turn Maserati into affordable family sedans for Italian men, Ferrari were eyeing them to be their luxury arm. With big financial clout and a plethora of Ferrari hardware and technology at their disposal, Maserati were poised again to make automobiles that mattered. Their first real partnership, to this end, was the Maserati Coupe and Maserati Spyder that came out in 2002. The combination of Trident styling over the chassis and powertrain of a Prancing Horse ensured great success and enhanced reputation that saw the car brand being sold, once again, in North America, after an 11-year absence.

It was from here that they turned their attention to one of their iconic models – the Quattroporte. Utilizing the same 4.2-liter V8 Ferrari engine, this would be the foundation from what would be built around it. The sensual curves of the bodywork would also mark an auspicious occasion as this was the first Maserati to be designed by Pininfarina for 50 years. The long overdue wait for the 2007 Maserati Quattroporte was due to an ultimatum issued by Enzo Ferrari, as he told the famous design house that they could only design cars for one of them. Now that the Trident was under the wing of Ferrari allowed for a bend in the rules.

What was unveiled as a result of all of this work was instantly regarded as a classic Maserati. With an alluring shape, high performance and handling matched only by its elegant and sumptuous interior, put this luxury sedan to the forefront of a very competitive field. As with previous models, the 2007 Maserati Quattroporte would be fitted with the same 4.2 Liter V8 Ferrari engine. While this would provide all models with 400 hp at 7,000 rpm, the difference in transmissions meant varying torque and acceleration numbers. The original ‘DuoSelect’ six-speed automated manual gearbox would achieve 333 lb-ft of torque at 4,500 rpm though the new six-speed automatic improved this to 340 lb-ft at only 4,250 rpm. But the manual would give a better speed and acceleration, as it managed to hit 0-60 mph in 5.2 seconds and hit a top speed of 171 mph. The new automatic gearbox could only do the 0-60 mph dash in 5.6 seconds and make 168 mph.

The engine note was scintillating as, even at low revs, the V8 roared from under the hood and out the back of the quad tailpipes. Fuel economy for this big luxury sedan was gauged at 13 mpg in city driving and 18 mpg on the highway.

Much to everyone’s relief, the 2007 Maserati Quattroporte now had a six-speed automatic transmission by the German specialists, ZF. This would be, by no means, an easy alteration. While the DuoSelect was installed over the rear axle, the new ZF automatic gearbox was shifted to the front beside the V8 engine. This would create differences in the weight distribution with the new model having a 49/51 ratio as opposed to the original’s 47/53. Though this was still keeping the weight bias to the rear of the car, reviewers found that there was a slight chance of oversteer when attacking corners. The new automatic gearbox would give much smoother shift changes than the automated. Both upshifts and downshifts were quicker and matched with correct rev counts that will give any driver confidence in the transmission.