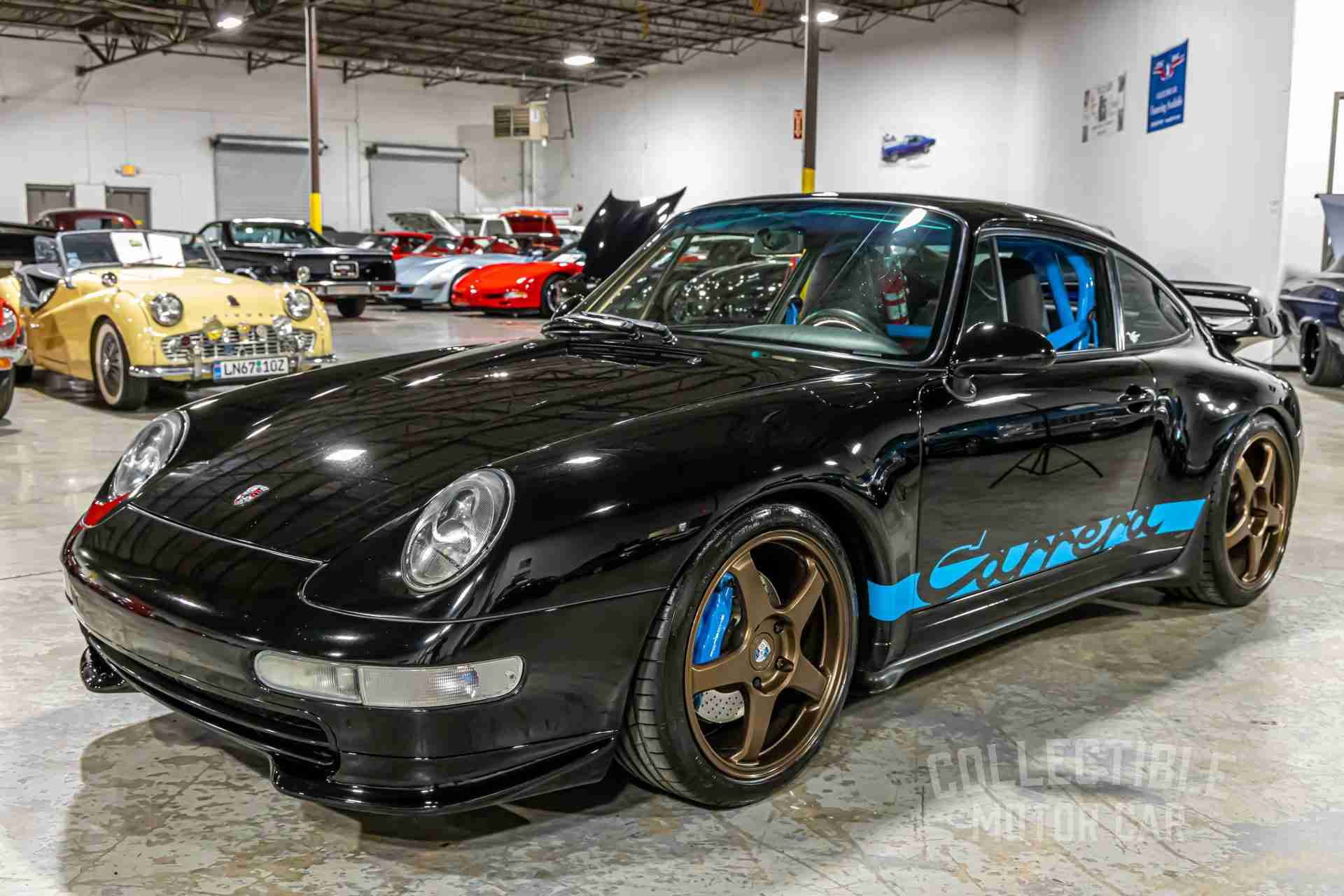 This 1995 Porsche 911 Carrera coupe is a modified example featuring a fiberglass rear spoiler, RS-style front spoilers and side skirts, Euro-specification taillight lenses, Fister mufflers, 18″ Enkei wheels, Turbo-specification brake calipers, and Bilstein coilovers as well as an FD Motorsport short-shift kit, a 996 steering wheel, a DAS roll bar, a Kenwood stereo, and an aftermarket amplifier and speakers. Power is supplied by a 3.6-liter flat-six paired with a six-speed manual transaxle, and the car is finished in black over black upholstery. Factory equipment includes includes a limited-slip differential, a power-operated sunroof, cruise control, and air conditioning. The car was first registered in Missouri and spent time in Illinois and South Carolina before it was acquired by the seller in 2009. This 993 Carrera coupe shows 215k miles and is now offered in with the owner’s manual, service records, A very detailed 3″ 3 ring binder showing all the restoration of the 993 spare parts, and a clean Georgia title in the seller’s name.

The car is finished in black and features a fiberglass rear spoiler, RS-style front spoilers, RS-style side skirts, and modified bumpers with the bumperette holes filled and smoothed. Additional exterior details include a sunroof, Carrera side script framed in blue, HID headlights, Euro-specification taillight lenses, fog lights, clear front turn signals, and quad exhaust outlets. Scratches and chips are noted. The Carfax report indicates four accident reports, with two in May 2013 describing damage to the right-front and front, an accident in August 2013 showing damage to the left-front, front, and right-front, and a final accident in August 2014 with damage to the front. The seller states that the front bumper, hood, fenders, and lights were replaced in 2013, and the front bumper cover was replaced again in 2014. The removed side skirts and rear spoiler are included in the sale.

Aftermarket 18″ Enkei alloy wheels are mounted with Continental Extreme Contact Sport Plus tires measuring 225/40 in front and 285/30 at the rear. Braking is handled by blue-finished Turbo-specification calipers over cross-drilled rotors at all four corners. Bilstein coilovers have been installed in place of the factory units, and a strut tower brace has been added.

The cabin features replacement power-adjustable front seats that were reupholstered in black leather and are complemented by a color-coordinated center console, dashboard, door panels, and carpeting. Features include a Kenwood stereo, a five-channel amplifier, aftermarket speakers, a drink holder, a DAS roll bar (this is mounted in the rear seatbelt factory mounts and can easly be removed and put back to the factory original), cruise control, a rear-seat delete kit, carbon-fiber trim, air conditioning, an FD Motorsports short-shift kit, Porsche blue seatbelts, aluminum door sills, and Rennline components consisting of a driver-side track mat, a pedal board, and aluminum pedals. The seller notes cracks on the top of the dashboard. The wooden pedal board and a replacement driver-side carpet are included in the sale.

The three-spoke 996-style steering wheel frames blue VDO instrumentation with aluminum trim rings including a central tachometer, a 180-mph speedometer, an analog clock, and gauges for oil pressure, oil temperature, oil level, and fuel level. The six-digit odometer shows 215k miles, approximately 96k of which were added under current ownership. The removed steering wheel and air bag are included in the sale.
The air-cooled 3.6L flat-six was rebuilt in 2022 at approximately 213k miles, and it was factory rated at 270 horsepower and 243 lb-ft of torque. An Optima yellow-top battery was installed along with an RS-style fan hub, a blue-finished engine fan, and Wevo motor mounts.

Power is sent to the rear wheels via a six-speed manual transaxle and a limited-slip differential. Fister Stage III mufflers were installed and the clutch was replaced at the time of the engine rebuild.

The Carfax report shows the aforementioned damage reports in May 2013, August 2013, and August 2014. Registration history is shown in Missouri, Illinois. South Carolina, and Georgia.