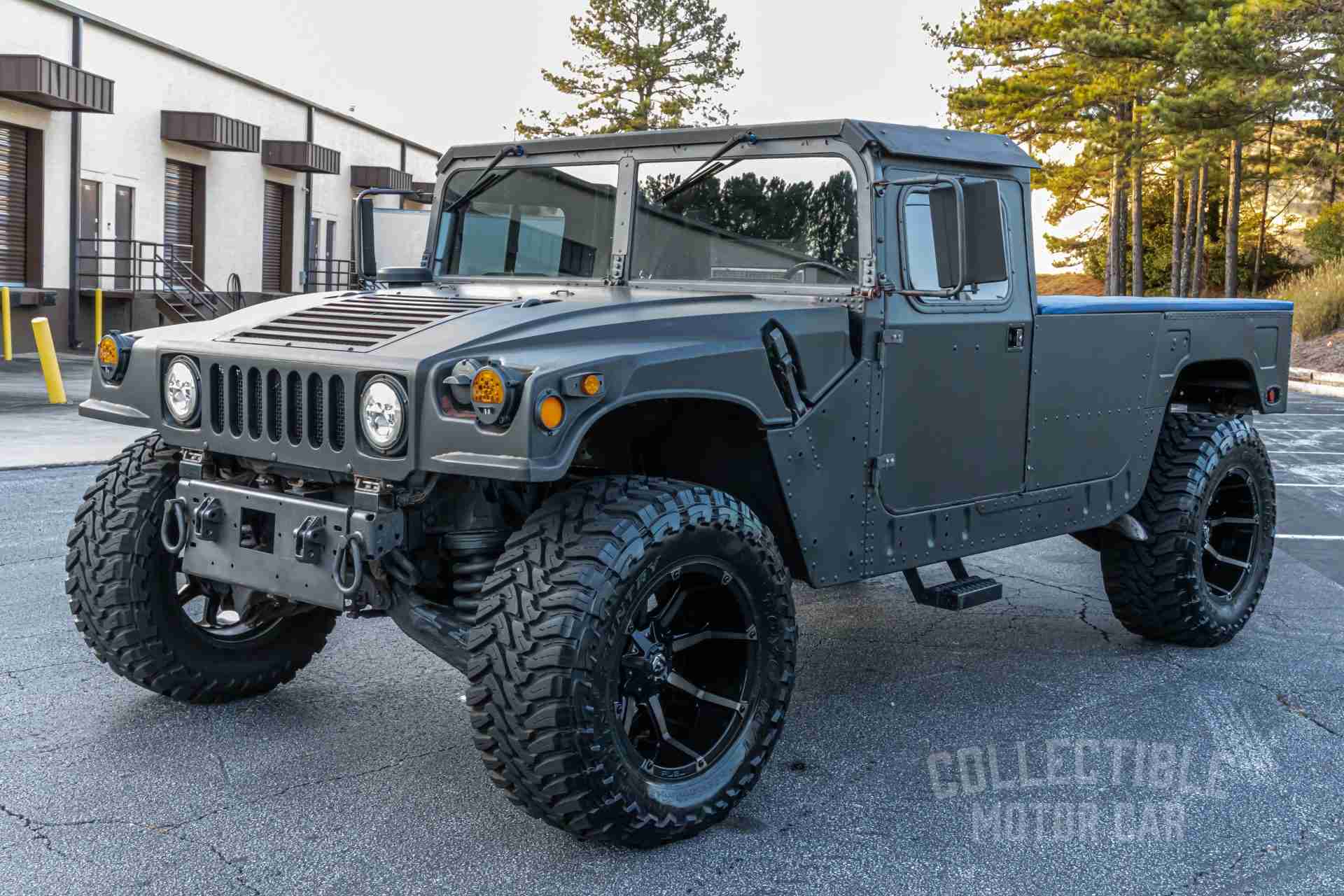 Collectible Motorcar of Atlanta is excited to offer this highly modified, former military HMMWV, commonly referred to as a Humvee. First appearing in 1985 as an upgrade to the Jeep, the military was in need of a larger, more capable vehicle with better hauling capacity, off road capability and versatility. AM general was awarded the contract for their all-new ground up design with many unique features ahead of its time. Featuring four-wheel independent suspension, four-wheel disc brakes, front and rear locking differentials, AWD / 4WD, portal hubs, 1.25-ton cargo capacity and much more. Combined, this gives the truck insane entry / departure angles as well as side slope capability. Each truck is built upon the same chassis / body, with the ability to configure as a 2 door, 4 door, truck or wagon.

The Humvee is still in production today as an upgraded version using the same core components that first appeared over 30 years ago. As time went on AMG continually improved upon its original design and these upgraded components are all cross compatible with the same basic platform. This later model ’99 M1123 is a former Marines truck and has many factory upgrades over prior models including 4l80E 4Speed Automatic transmission, 6.5L Detroit Diesel engine, 10K axles / suspension, 200-amp 12/24-volt alternator, Red Dot air conditioning system and winch mount.

This truck has undergone some extensive modifications since its time in the service. The hard top and hard doors come from Midwest Military Equipment. It’s riding on a set of MASSIVE 38″ x 15.5″ mud tires and Fuel 20″ wheels made possible by a 4″ lift. With no solid axles to get in the way, this rig has almost 2 feet of ground clearance on the entire underside. The headlights, blinkers and stop lights have been upgraded with newer LED units. Out back, the military pintle hitch has been supplemented by a much more practical 2″ receiver hitch, as well as a converter box to attach standard 12-volt trailers to the truck’s 24-volt system. In the interior you’ll find a nice pair of Corbeau seats and 4-point harnesses, a much-welcomed upgrade over the uncomfortable military seats.

Mechanically identical to the famed Hummer H1, these former military versions are an excellent alternative. You won’t need to fear using it for its intended purpose, an incredibly capable off-road machine. Load it up for a weekend of off-roading and come home to simply hose down both the exterior and interior. Then you can drive it to work on Monday cruising the interstate at 75 mph. Call us today or come in person to check out this beast!