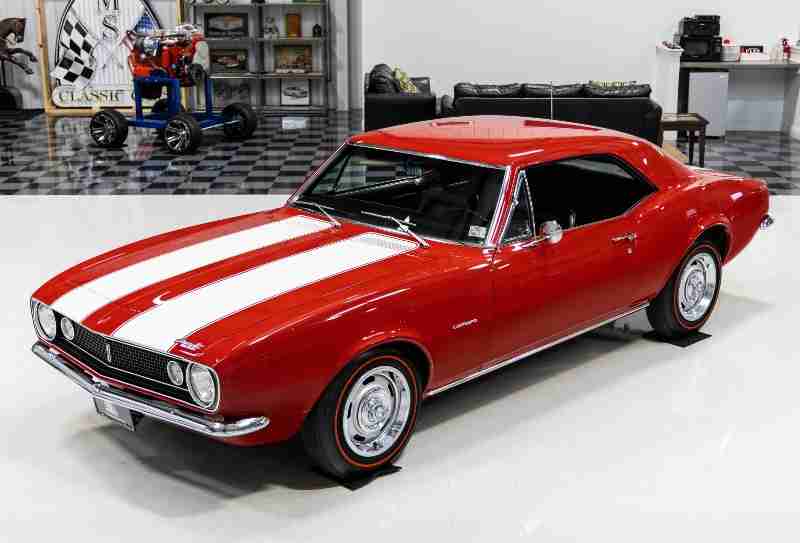 A highly appraised 1967 Camaro Z28 will be offered at No Reserve in the upcoming Barrett-Jackson Auction in Scottsdale AZ.

**THIS VEHICLE WILL BE SELLING WITH NO RESERVE AT THE UPCOMING BARRETT JACKSON AUCTION BEING HELD IN SCOTTSDALE, AZ JANUARY 21-29, 2023. IT IS SELLING ON SATURDAY JANUARY 28TH. THE LOT NUMBER IS #1307.1. IF YOU’RE INTERESTED IN PURCHASING PLEASE REGISTER TO BID DIRECTLY WITH BARRETT JACKSON. IT’S A QUICK AND SIMPLE PROCESS. PLEASE CALL WITH ANY QUESTIONS. THANK YOU**

One of only 602 Z28’s built in 1967. This highly coveted 1967 Chevrolet Camaro Z28 is a spectacular example and #16 in the 1967 Z28 National Registry. It has been certified as authentic by Camaro expert Jerry MacNeish of Camaro Hi-Performance. Williams Clemens, Jr the last owner of 40 years discovered the car and spent 25 years restoring it as accurately as possible with date code correct and NOS parts. The meticulous restoration was completed in 2007 and has been used primarily as a show car since. A photo album of the restoration is included. This car is one of only 17 -1967 Chevrolet Camaros to ever achieve the Legend Award and one of only 8 – 1967 Chevrolet Camaro Z28s. The car is one of only 6 in total 67-81 Camaros to ever achieve the Legend Award with a 100% score. This car is recipient of 14 prestigious awards from the AACA, Artistry in Motion, Buckingham Concours d’ Elegance, Camaro Nationals, Goodguys, Hemmings Musclepalooza, Meadowbrook Concours d’ Elegance, Muscle Car and Corvette Nationals and North East Rod and Custom Nationals. This car was featured in six magazines which include Collectible Automobile, Goodguys Goodtimes Gazette, Hemmings Motor News, Muscle Car Enthusiast, Muscle Car Review and Old Cars. All the awards and magazines are included. As the original GM Assembly Division letters documents this car was shipped on July 7th, 1967 to Williams Chevrolet located in Lebanon, PA. The two letters are included. It was ordered with a Bolero Red with white stripes exterior, black vinyl trim interior and the following options (A01)- tinted glass, (A67) –Folding rear seat, (AL4) –Contour bench seat, (G80)- Positraction, 4.56 ratio, (J52) – power disc brakes, (J56) –HD brakes, (M21) – close ratio 4-speed transmission, (U25) – luggage compartment lamp, (U26)- underhood lamp, (U27)- glove compartment lamp, (U28)- ashtray lamp, (U28) –ashtray lamp, (U29) – courtesy lamp, (U57)- stereo tape system, (U63)- AM radio, (U73)- manual rear antenna and (Z28) – special engine and equipment. The contour bench seat, folding rear seat and HD brakes are rare options. As example, only two 1967 Camaro Z28’s are known to exist with a contour bench seat. The car was originally purchased by George Keener who was the service manager at Williams Chevrolet. George sold the car after a short time of ownership to Gene Garloff who was the auto body manager at Jones Pontiac. Gene sold the car to Barry Vonstetten who was in the service in 1968. Barry sold the car to Fred Charles who was also in the service in 1971. Unfortunately, Fred passed and his fiancée inherited through his military insurance. Dawn used the car as a daily driver for many years before selling it to Flame-Rite Used Cars in 1981. The dealership sold the car to William Clemens, Jr. in July of 1982. The body retains most of its original sheet metal and gorgeous color combination. The car sit’s on original 15 x6 Rally wheels with DF stamping and NOS trim rings/caps. The wheels are wrapped with a set of NOS 15 x 7.35 Goodyear Power Cushion redline tires which makes it one of only a handful that sport original correct style and size tires. The car is powered by a correct casted and dated 302 V8 that was rebuilt to exact Z28 specs including the NOS small journal crankshaft, rods, pistons and 30/30 solid lifter camshaft. It has the correct cylinder heads, Winters 610 intake 3910 Holley Carburetor, pulleys, clutch fan, alternator, starter, water pump and distributor. It’s equipped with a rare original factory Cowl Plenum Air Cleaner. The engine breathes through a concours Gardner dual exhaust system. The engine is coupled to the original matching numbers Muncie 4-speed transmission and 12-bolt POSI rear end with 4.56 gears. GM promotional material and some photos of past owners with the car are included. This car was recently serviced and detailed which is documented with an invoice that is included.