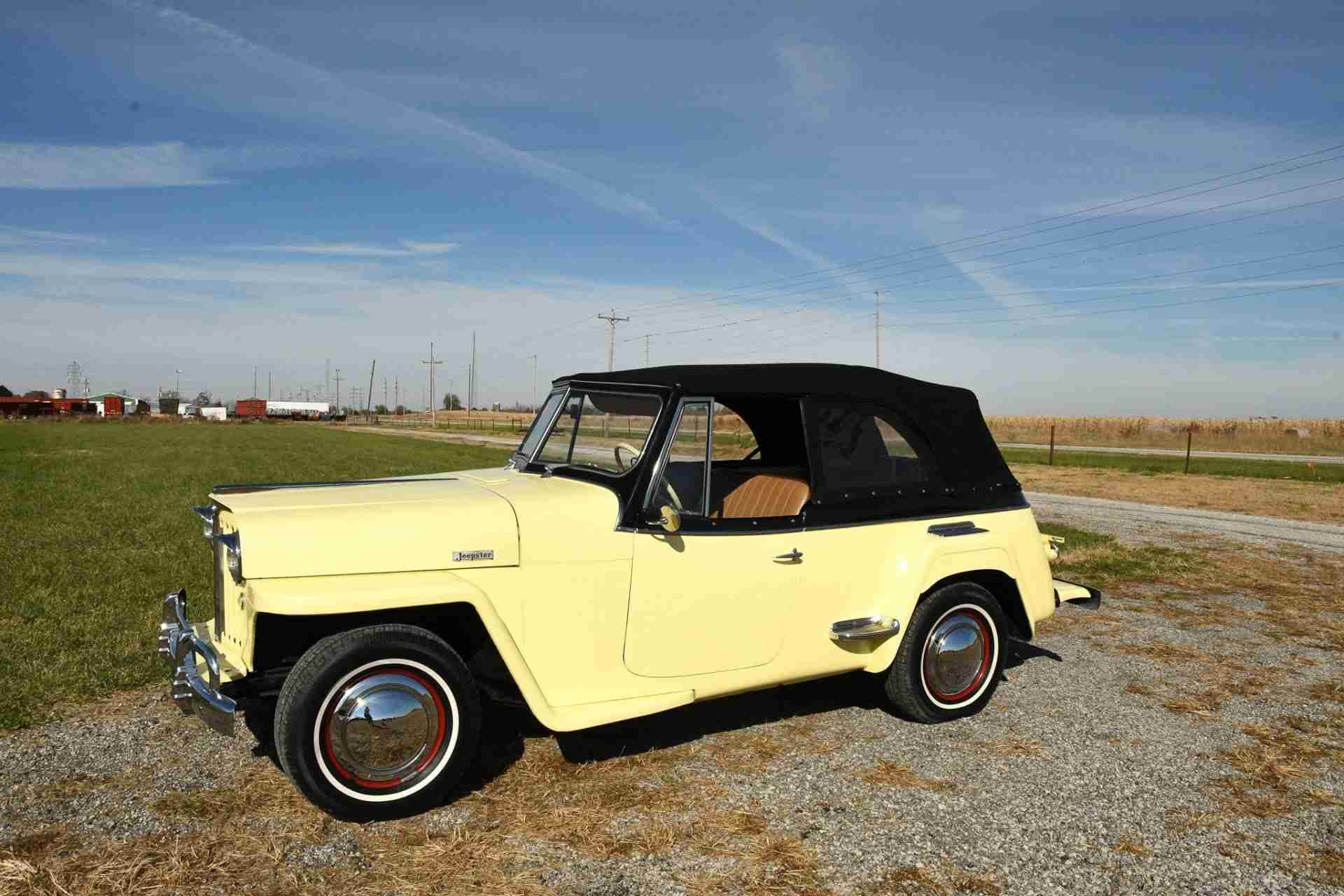 1949 Willys Jeepsters. Available now is this excellent example of a 1949 Willys Jeepster finished in a yellow paint covering a beautifully refinished tan leather interior. This Jeepster is powered by the original 4 cylinder engine that has recently gone through a complete overhaul mated to a 3 speed manual gear box with overdrive. This well optioned version features the rear mounted spare tire, front grill guard, and AM/FM radio. The cloth convertible top and side curtains are nearly new and in excellent condition. Odometer on this Willys reads 96,169 miles. No matter what type of classic vehicle enthusiast you are, this Jeepster is a must have in any collection. These are becoming more rare by the day and the skyrocketing valuations on these is a reflection of where this beauty is going. If a Jeepster is on your target list, this is the one you don’t want to miss.

You certainly wouldn’t be far from the mark if you said the Jeepster was the original “crossover” vehicle, since it was indeed an attempt at being a passenger car while still maintaining some of the traditional Jeep traits and appearance. Willys-Overland, the owner of the Jeep trademark, started producing the CJ (which stood for Civilian Jeep) in 1945, right after WWII ended. The company then introduced the Jeep Wagon in 1946 and added the Jeep Truck in 1947. All three of these models, however, were still very utilitarian vehicles and lacked the finesse, softer styling and amenities of traditional passenger vehicles. The company decided it needed a vehicle to fill this gap in their product lineup, so the Jeepster (known as the “VJ” inside the company) was introduced by Willys-Overland in 1948. While the automotive press was generally enthusiastic about the Jeepster, it was less than a stellar success among the buying public. Its distinctive boxy styling (the creation of noted industrial designer Brooks Stevens) was decidedly “Jeepish” and to many GIs who had served overseas during the war, it was reminiscent of German army troop vehicles (that eventually emerged on the consumer scene several decades later as the Volkswagen Thing). And since the Jeepster was only available with rear-wheel-drive, it undoubtedly lost market share to potential buyers who wanted and/or needed 4-wheel-drive capabilities.

The same 62-horsepower, 134cid (2.2 liter) straight 4-cylinder “Go Devil” engine used in the CJ model also powered the Jeepster, and it was coupled to a 3-speed manual gearbox that was available with optional overdrive. Drum brakes at all four corners provided the stopping power, and the Jeepster’s front end and single transverse leaf spring suspension was the same as that used on the Willys Station Wagon, as was the rear driveline. The longitudinal rear leaf springs and the flat-top rear fenders were direct take-offs from the Jeep truck.

Poor marketing efforts coupled with sparse advertising further hindered public acceptance and sales of the vehicle. The company ceased production of the Jeepster in 1950, although some leftover models were still sold during the 1951 model year. In total, only 19,132 Jeepsters were produced.

Like a bad penny that keeps turning up in your pocket change, however, the Jeepster name was revived in 1966 on a new model, this time christened as the C-101 Jeepster Commando. And, as with the original Jeepster, sales once again failed to meet expectations, so American Motors (AMC), the successor to Willys-Overland, dropped the Jeepster name for 1972 and halted production after 1973. Ironically, many years later, the Jeepsters maintain a unique following among collectors.